The Most Colorful Cities in America, According to Adobe’s Color Wheel

What would the color palettes look like in some of America’s most striking cities — Charleston, South Carolina; Nashville, Tennessee; or San Diego, California? You’re about to find out! Shane Co. compiled a list of the 50 most Instagrammed cities around the U.S. based on hashtag usage. Then, we ran stock imagery of those 50 cityscapes through Adobe’s color wheel tool to generate a color palette for each city, and ultimately found the most colorful cities around the U.S. Let’s see where your city stacks up!

First, we turned to Instagram to generate a list of cities to analyze in this study. Where better to find cities with rich, photo-worthy hues than Instagram? We created a list of the 50 most Instagrammed U.S. cities based on hashtag usage. Using Tripadvisor travel guides and Shutterstock stock imagery, we pulled images representing the most iconic landmarks, sites, and neighborhoods in each of the 50 cities, along with an image of each city’s skyline. We then ran each city’s images through Adobe’s color wheel tool, which extracted a color palette with five hex codes. Based on the saturation and brightness of the hex codes, we generated a color score for each city and ultimately determined the most colorful metros in America.

The Most Colorful Cities, Ranked 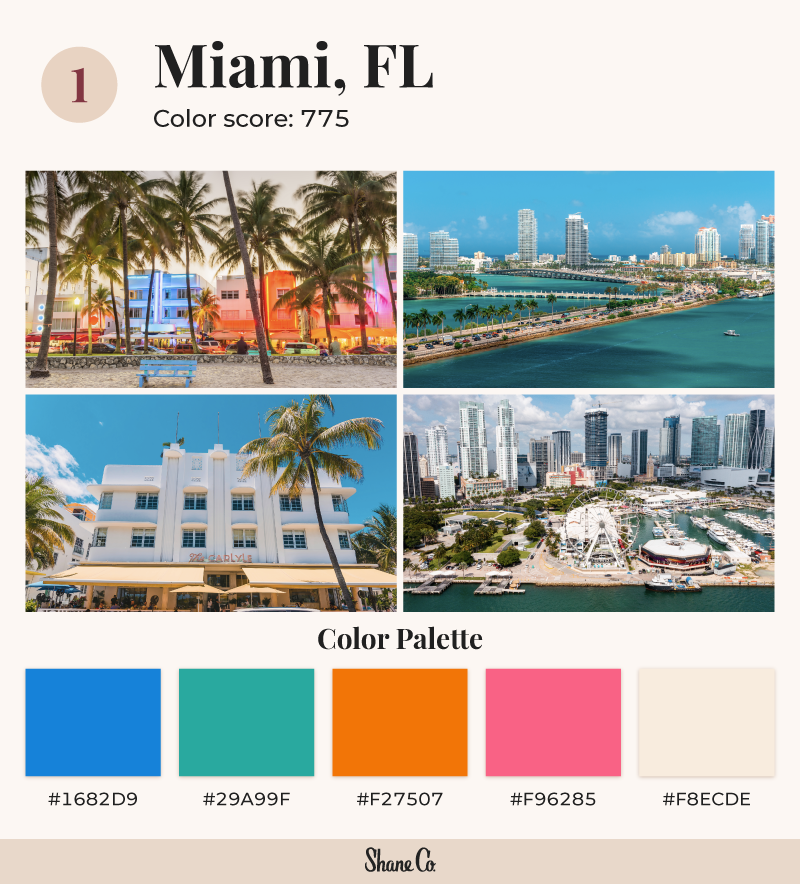 With sites like Wynwood Walls, South Beach’s Ocean Drive, and the Bayside marketplace, it’s no surprise that Miami, Florida, tops the list as the number one most colorful city in the U.S. Orange, pink, and green neons are splashed around Miami’s bustling nightlife scene, while the blue hues of Biscayne Bay and the Atlantic Ocean surround the city. South Beach’s Art Deco architecture and Miami’s outdoor street art museum, Wynwood Walls, also add to Miami’s colorful nature. 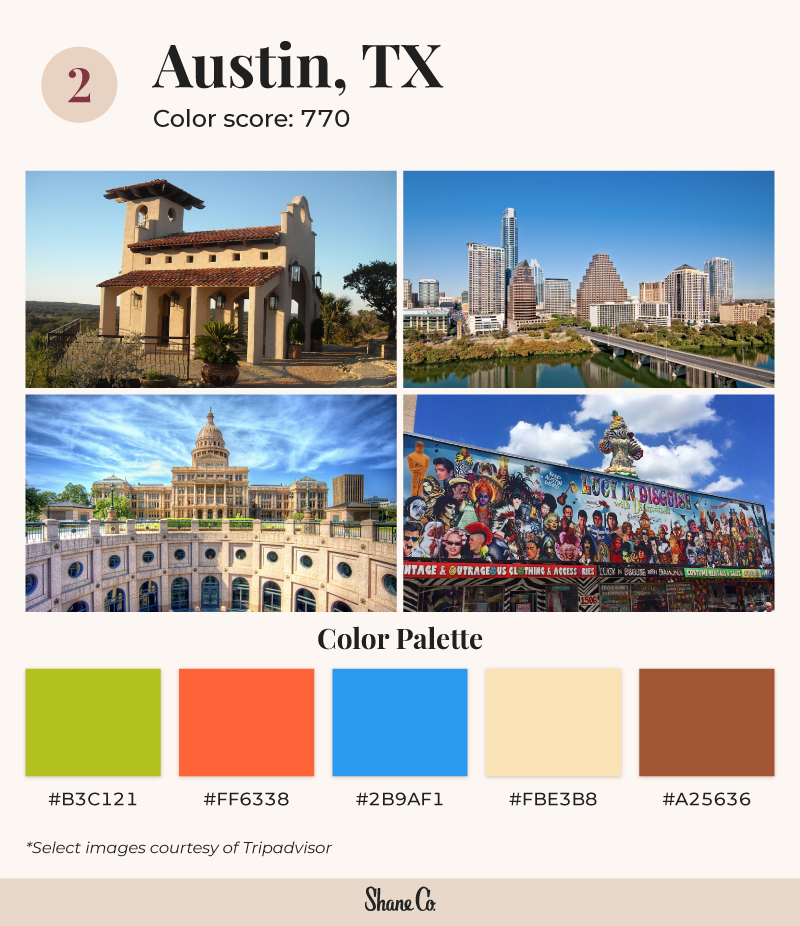 Austin, Texas, is the runner-up, boasting colorful attractions like the South Congress district (SoCo) and the city’s tallest mural, Tau Ceti — a jaw-dropping color spectrum that spans 103 feet. As one of the sunniest cities in the U.S., Austin sees its fair share of bright blue skies, which only helps its color score! Installations at the Blanton Museum of Art and the saturated hues of Austin’s Spanish & Mediterranean architecture also contribute to its number two rank. 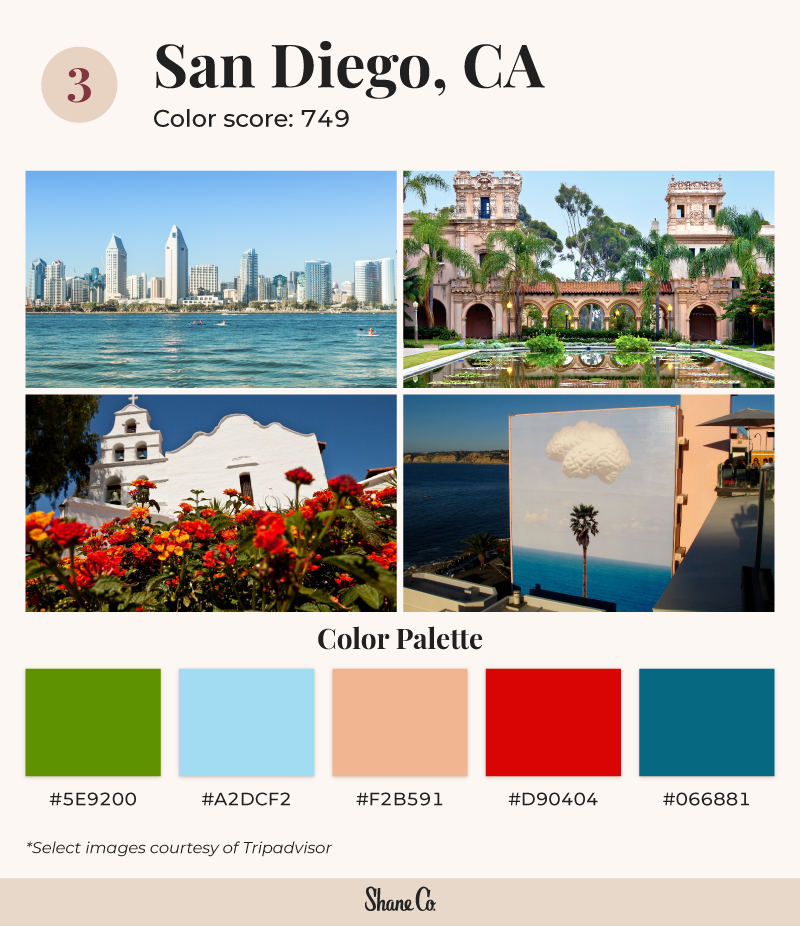 San Diego, California, takes home the bronze as the third most colorful city in the U.S. Colorful gardens surround some of California’s oldest missions, including the Mission San Diego de Alcala, while Pinterest-worthy art exhibits, like the Murals of La Jolla, have popped up around San Diego’s metro area. Bright green, terracotta, and salmon hues also cover one of San Diego’s most majestic landmarks, Balboa Park. Multi-colored flags hanging above the Historic Market Square and the city’s iconic River Walk are just a couple of reasons why San Antonio, Texas, ranks fourth on our list of most colorful cities. Golden sunrises over the Alamo, the Selena mural, the bright pink Liberty Bar, and the Majestic Theater may also have something to do with it. 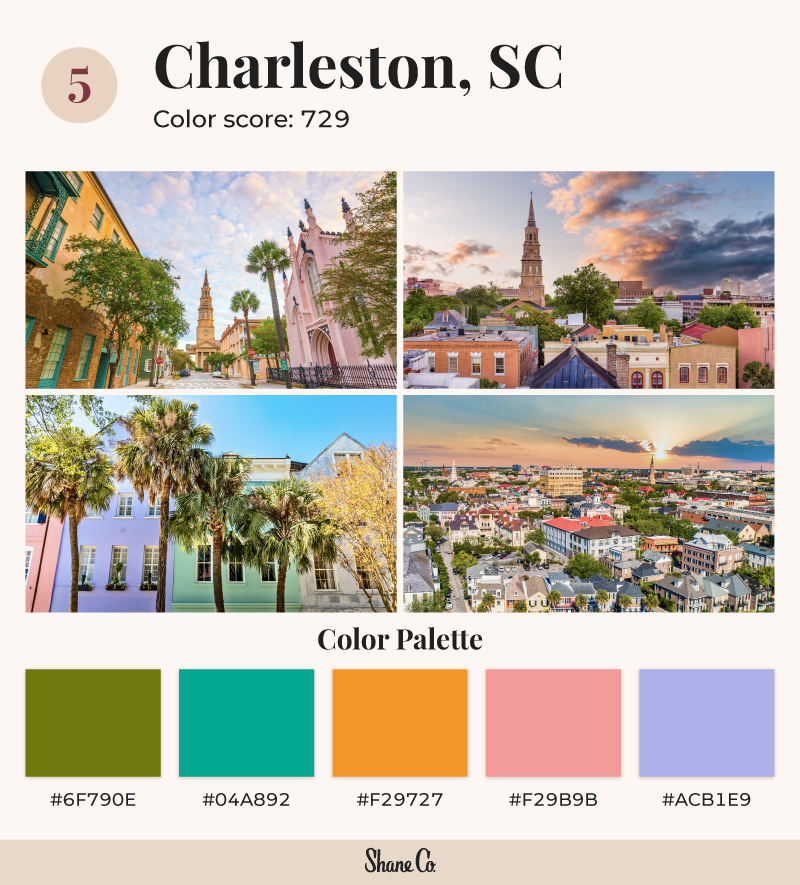 When we think about America’s most colorful cities, Charleston, South Carolina, instantly comes to mind (and for good reason). Highly photographed sites like Rainbow Row, The Battery, and King Street feature aquamarine homes, pink churches, and green palm trees around every corner.

Here’s a brief history lesson: Rainbow Row fell into slum-like conditions after the Civil War, until Dorothy Porcher Legge and her husband purchased this section of homes on East Bay Street. They painted the homes in a Caribbean color scheme in order to beautify the street. Now city ordinances dictate that the pastel colors remain intact. Charleston’s rich history, along with its French Huguenot roots, significantly boost this city’s color score!

Other Colorful Cities Around the U.S.

Scroll through the carousel below to find the remaining cities in the top 15 and their corresponding color palettes. Vibrant cities like Nashville, Tennessee; Las Vegas, Nevada; and New Orleans, Louisiana, naturally landed spots in the top 15 most colorful U.S. cities, as did some cities that are a bit unexpected — Tucson, Arizona; Pittsburgh, Pennsylvania; and Cincinnati, Ohio, to name a few.

On the opposite end of the spectrum, the five cities with the lowest color scores were: 1) Detroit, Michigan; 2) Chicago, Illinois; 3) Los Angeles, California; 4) Dallas, Texas; and 5) St. Louis, Missouri, due to the lower levels of saturation and brightness in each city’s skyline, as well as in their popular sites, landmarks, and neighborhoods.

The Golden State of California is home to two of the most colorful cities, according to Adobe’s color wheel — San Diego (#3) and San Francisco (#6) — and two of the least colorful cities — Los Angeles and San Jose. From a color perspective, the Hollywood sign, Griffith Observatory, and other iconic L.A. sites were no match for San Francisco’s Golden Gate Bridge, Lombard Street, and Alamo Square neighborhood, better known as the colorful row of Victorian houses from the opening credits of “Full House.”

Whether you’re mural hopping in Miami or scootering down San Fran’s windy Lombard Street, there are plenty of ways to take in some of the country’s most colorful sites. Conveniently, America’s most colorful cities can double as the ideal venue for a proposal, engagement photoshoot, or even destination wedding. Hop on one knee with your Shane Co. engagement ring on San Antonio’s romantic River Walk, or say your “I do”s at San Diego’s dreamy Balboa Park — the opportunities are endless!

Holiday shopping for him has never been so easy. E

Whether they're the coordinates of the place you m

London blue topaz, this is your month to shine. Sh

Need a Christmas gift idea? We have just the ring.

Give a gift to treasure. 🎁 Shop all gift ideas

✨ Our Cyber Monday Picks ✨ These go-with-anyth

Perfectly purple. 💜 Did you know you can choose

These are a few of Tom Shane’s favorite things.

#BlackFriday is for black sapphires. 🖤 Shop our