What is Diamond Clarity?

You’ve probably heard of the 4 Cs of diamonds, and maybe you’ve even heard of diamond clarity. But what exactly is clarity, and how does it affect your diamond buying decisions?

Diamond clarity is, simply put, the appearance or lack of inclusions and blemishes in a diamond’s surface. All diamonds have a certain number of inclusions — it’s one of the ways you can tell a real diamond from a manufactured one. Because natural diamonds are formed from carbon that has been exposed to years and years of heat and pressure deep within the earth, they always have a variety of internal and external characteristics that affect their clarity. These inclusions are caused by small crystals that become trapped in a diamond while it is forming. As the crystal grows, it can sometimes develop irregularities in its atomic structure.

When the Gemological Institute of America (GIA) was founded in 1953 by Richard T. Liddicoat and his colleagues, the diamond grading system and clarity scale as we know it today came into existence. At the time, jewelers were using terms like “loupe clean” or “piqué” to describe the clarity of diamonds, leading to misinterpretations and no concrete standards by which to judge diamond clarity. Since the formation of this system, almost all jewelers use the same clarity terms that we do at Shane Co., even those in other countries or speaking different languages. The current clarity scale lists the types of diamonds below.

This range of diamonds has inclusions that are obvious under 10x magnification. This may affect the transparency and brilliance of the stone. I3 diamonds have the highest amount of obvious inclusions, while I2 and I1 diamonds have slightly less, respectively.

In these graded stones, inclusions are noticeable, but not obvious, under 10x magnification. SI1 are slightly less included than SI2. These diamonds are a great value because they are generally lower in price while still maintaining much of their brilliance and fire. They are an extremely popular diamond type.

Very Slightly Included (VS1 and VS2):

For these diamonds, inclusions can be observed under 10x magnification, but are not as easy to spot and can be characterized as minor. VS1 diamonds are a slightly higher grade than VS2. These stones are also very popular with shoppers.

The inclusions in these diamonds are so small that they are difficult for even a skilled grader to see under 10x magnification. VVS2 diamonds may have a few more inclusions than VVS1 diamonds. This range of stones is less popular than VS and SI diamonds, despite their high clarity, as they come with a higher price tag.

With internally flawless diamonds, no inclusions are visible under 10x magnification. A few small surface blemishes may still be visible. IF diamonds are more expensive and less popular than other grades, but offer a higher display of brilliance in every stone.

No inclusions or blemishes are visible under 10x magnification in the highest grade of diamonds. FL diamonds are so rare that less than 1% of all diamonds make their home in this grade. These are the most expensive types of diamonds and generally considered the most beautiful.

Many inclusions and blemishes are much too small to be seen with the naked eye. To the diamond buyer, you may not be able to tell the difference between a Slightly Included diamond and a Very Slightly Included diamond, but an expert jeweler certainly will. It’s important to buy your diamond from a reputable source, like the experienced jewelers at Shane Co. We always want our customers to be as informed as possible before making their purchase, to ensure they are getting the diamond they truly want.

There are five factors that jewelers consider when determining diamond clarity grade. All of these factors are taken into consideration before a grade is given. They include:

Relief simply refers to the distinctness of the inclusion. In other words, how visible it is on the diamond. The greater the relief, the lower the diamond will rate on the clarity scale.

These are hairlike lines that usually occur during diamond cutting. These inclusions extend from the girdle into the surface of the stone. Heavy bearding appears as a fuzzy fringe.

Graining is caused by irregular crystal growth and can appear as lines, streaks or reflections within the diamond.

A large or deep opening in the stone’s surface. These inclusions are generally created during the polishing process, when an internal inclusion is dislodged from the diamond. This leaves an opening on the surface of the diamond, which often traps dirt and can become dark in color.

A feather inclusion is a small crack within the diamond. It can look transparent or resemble a featherlike form. These inclusions can affect the durability of the diamond, particularly if they approach the surface or girdle.

A small opening on the surface of the diamond. This is usually caused by man-made wear and tear to the diamond.

A cloud inclusion refers to a cluster of crystals found grouped together. When they grow large enough, these clouds can make the diamond appear hazy and affect the “sparkle” aspect of the stone.

This inclusion follows its name: It is a crystal that has been trapped within the diamond. They can range from colorless to colors like black, red and green, depending on the nature of the crystal.

A knot is a white or clear crystal that’s reached the surface of a diamond.

This refers to a needle-shaped inclusion. They can sometimes appear in clusters, having a greater effect on the clarity of the diamond.

Pinpoints are small black or white crystals trapped inside the diamond.

Twinning wisps are a series of pinpoints, clouds or crystals that form as a diamond grows.

This inclusion refers to an area of rough diamond that dips below the surface of the polished diamond, usually found at the girdle.

What to Look for When Buying Loose Diamonds

Oftentimes, customers will get caught up in the importance of the clarity grade when buying a diamond, incorrectly assuming that a Flawless diamond is the best purchase to make, simply because it’s the rarest. However, the appearance of clarity is greatly affected by the size and shape of the diamond. Diamond shapes like emerald and Asscher have facets that emphasize the transparency of the stone. This means that inclusions can be more visible than they are in diamond shapes like round or princess. These shapes hide inclusions much better because of their brilliant facet pattern.

Larger diamonds can also make inclusions appear more visible, as the facets are also larger. If you choose to prioritize the carat, you’ll also have to go for a higher clarity grade to reduce the appearance of imperfections on the stone.

How to Buy a Diamond (Without Breaking Your Budget)

The most important thing to remember when shopping for a diamond is not to let yourself get pressured into purchasing a more expensive diamond simply because you believe it’s a better value. Shopping at Shane Co. can help make this decision easy, as we have a noncommission staff that won’t pressure you into spending more money. Figure out what aspects of the diamond you care the most about, and also consider how the stone will look in the setting of your choice. Picking a band with pavé-set diamonds for extra sparkle or choosing a style such as a halo engagement ring can make the stone appear larger without having to increase clarity and go over your budget.

Keep in mind that the grade of a diamond doesn’t necessarily represent its value. You can look at a variety of diamonds within the same grade and find that some are much more appealing to you than others. Shane Co. buys diamonds based not only on their GIA grade, but also on how they look: we hand-pick the prettiest stones, taking care to prioritize sparkle and beauty. Our store lighting replicates natural daylight, so you can see the true appearance of your diamond and feel confident in your purchase. Ultimately, choosing a diamond is a very personal decision that only you can make. 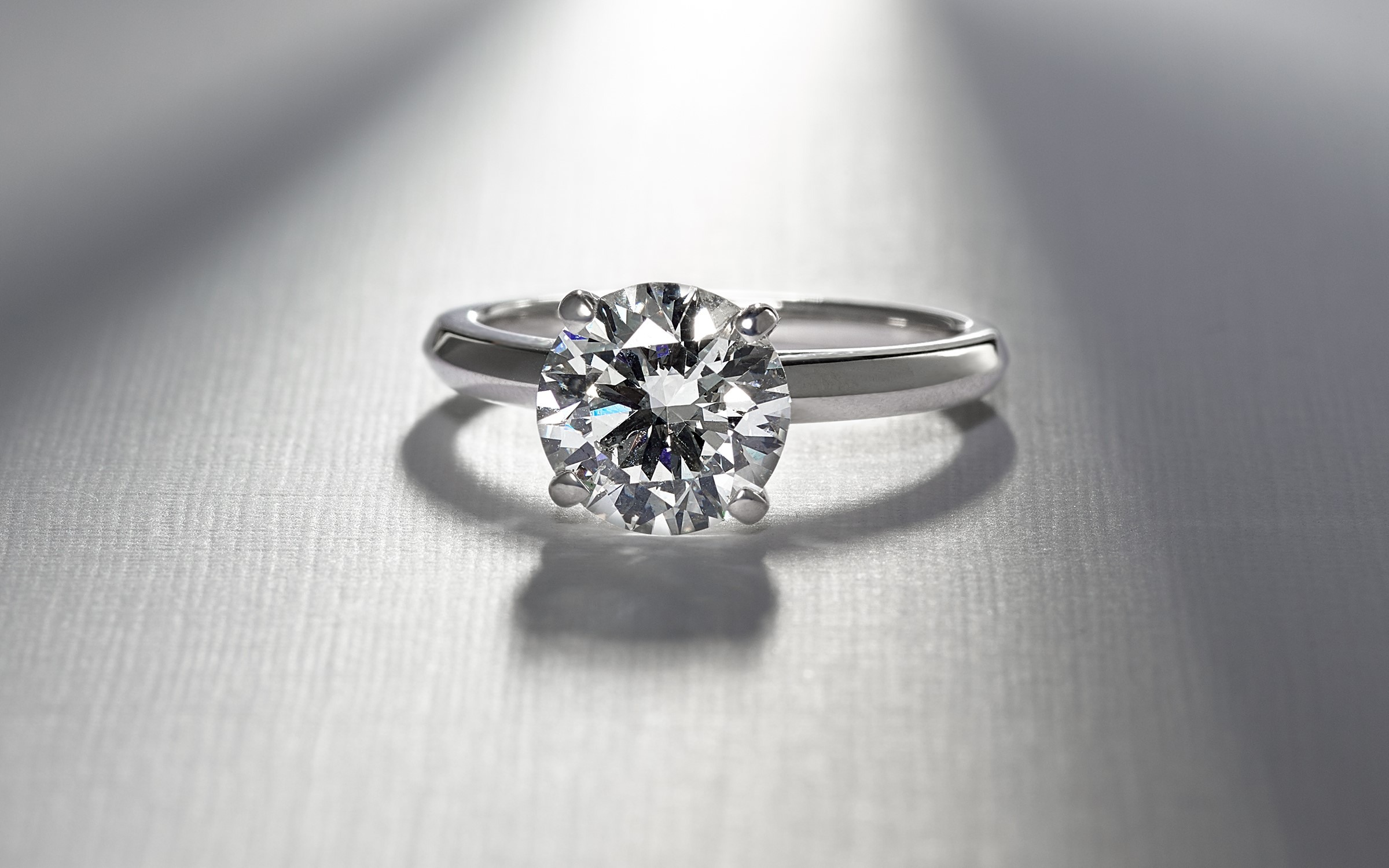 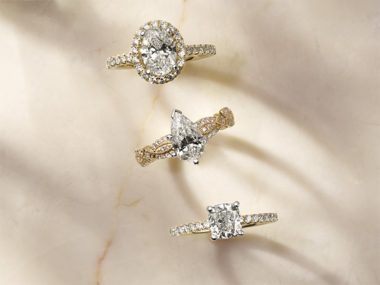