The Most Popular Candle Scent in Every U.S. State

Did you know that wick candles originally burned a kind of animal fat called tallow instead of wax? Unlike wax candles, tallow candles produced a lot of smoke and a foul, acrid odor. Lucky for us, modern wax candles not only burn cleanly, but they also provide a wide array of pleasant scents that buyers get to choose from.

This got us thinking here at Shane Co.: Do different states prefer different scents? Which scent is the most popular across the country? We wanted to find out.

To answer these burning questions, we first put together a list of 24 of the most popular candle scents, from pumpkin spice and lavender to cotton and tobacco. Next, we looked at the Google search data from November 2020 to November 2021 for each scent by state and took most searched to mean most popular. So without further ado, here is…

The Most Popular Candle Scent in Every U.S. State

Disclaimer: Alaska, Hawaii, Montana, North Dakota, South Dakota, Vermont, and Wyoming were not included as there was not enough search data for any of these states to declare a conclusive number one candle scent.

Regional trends were fairly scarce in this investigation, but there are a couple of notes. For starters, the South’s Arkansas, Mississippi, and West Virginia all searched for the fall staple, pumpkin, more than any other candle scent. There’s also the odd clump of West-meets-Midwest states (Colorado, Nebraska, and Kansas) that all had vanilla as their most searched candle scent. Then, if you’re willing to count two nearby states as enough to mark a trend, there’s also Wisconsin and Minnesota’s shared love of lavender, and Oregon and Nevada’s mutual decision to stop and smell the roses.

Outside of these, though, there was a lot of geographic spread among the more popular candle scents and also a lot of scents that won just one (or zero) states. For example, Pennsylvania was the only state to search for the cranberry candle scent the most, while New Jersey falls into the same boat, but with the cookie candle scent. Also, fun fact, Oklahoma was the only state to have a specific candle, not just a specific scent, take the number one spot.

The Most Popular Candle Scent Overall

It was a close race, but when everything was said and done, pumpkin edged out vanilla by a margin of just one state! After vanilla, there’s a huge drop-off to third place, where lavender, lemon, and rose all tied with three state wins each, then fourth place is another tie consisting of citrus, coconut, peppermint, and gardenia, which each won two states.

Some more single-state winners include maple in Kentucky, cedar in Iowa, cotton in Illinois, Fraser fir in Utah, mahogany teakwood in Georgia, balsam in New Hampshire, and tobacco in Michigan. And if you’re wondering which other scents made our list of 24, but didn’t win any states? Those are Champagne toast, pink sands, apple, eucalyptus, and cinnamon.

We hope your favorite candle scent made the list, or even better, came in first in your state! While candles make for some of the most versatile gifts around, if you’re looking to spend a little more on someone special, be sure to visit our website for the most beautiful jewelry in any price range. 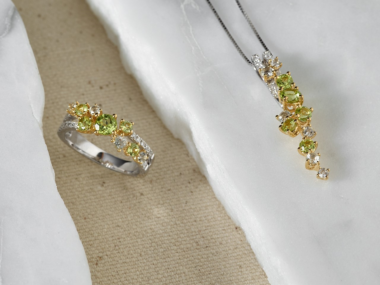 Read More
It’s almost August, and that means it’s time for another deep dive on this month’s birthstone. Luckily for…
Read More