Have you ever been introduced to a coworker for the first time and before speaking, thought: “This passing pleasantry will be discussed famously in the future; the two of us will not only reference the interaction a thousand times, we’ll also come to know the exact GPS coordinates of where we are both standing at this very moment”? Sam shared that this is exactly how he felt when he first met his fiancée, Jess.

The two met when Jess joined Sam’s team at Sullivan University in Louisville, Kentucky. Sam swears he had nothing to do with the decision, but Jess’ desk ended up being right next to his. Eventually they developed a friendship and started taking daily walks together during their break. This friendship morphed into texting, then some long calls, a few double dates and eventually a full-fledged relationship.

For the last three and a half years, Sam and Jess have enjoyed plenty of adventures like weekend cabin getaways, international cruises and even moving in together! Sam says Jess has become the love of his life, and he was so excited to plan the perfect proposal. So, in October of 2016, Sam and Jess decided to make a little trip to Shane Co.

At the time, Sam said he was planning on proposing a year from this first visit to Shane Co., but Jess fell in love with her dream engagement ring: a beautiful rose gold infinity ring with a lovely halo. That December, Sam went ahead and bought Jess’ ring, and worked with our Louisville store until the end of January to find the perfect brilliant round diamond to set in the center. He said his decision about the center diamond was confirmed when two ladies next to him in the store went all aflutter over the combo! 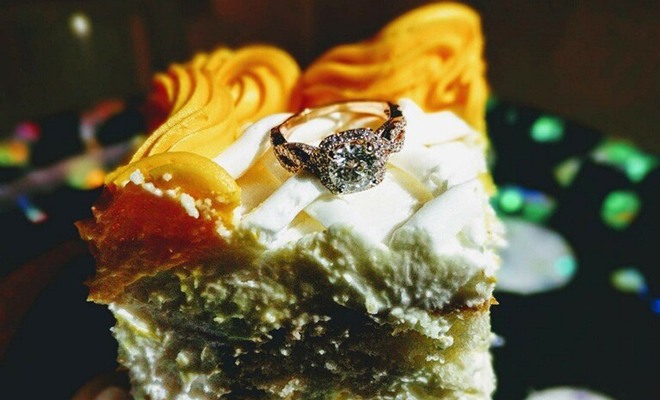 With ring in hand, Sam just had to wait a month for the day of the proposal—Jess’ 30th birthday on February 18. Sam says you’ve never met anyone as obsessed with birthdays as Jess. She tends to pull out all the stops for others, and she’s known for turning her big day into more of a “birth month” celebration. As Sam put it, “Your 30th birthday is a moment in a time that you are guaranteed to visit only once,” so it was the perfect special time and place for Jess’ proposal.

On the day of the proposal, Jess and Sam went to brunch with close friends and family, then headed to their alma mater to watch a basketball victory. Afterwards, they went to dinner with Jess’ family at a gastropub with a menu tailored to include all of Jess’ favorites. Then they all traveled to a friend’s home where they met up with 30 more friends and family members. They had gone all out decorating with things like giant balloons, Jess bobble heads, a photo booth and a positively huge cupcake piñata! 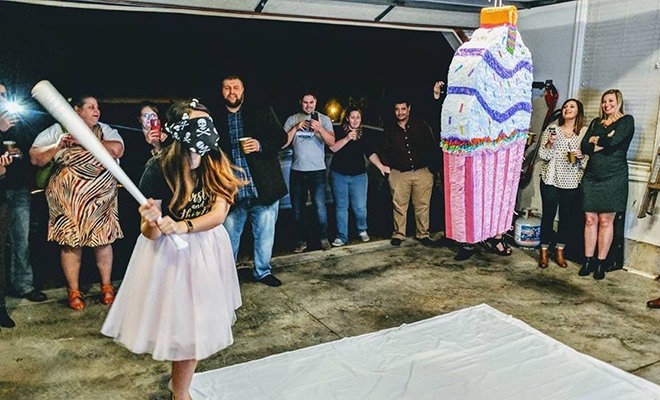 Jess thought it’d be fun to do a cake smash for her birthday, but Sam planned for her to “smash” a giant cupcake instead. So, Sam grabbed the golden karaoke microphone and asked everyone to gather around the piñata, while handing Jess a custom baseball bat wrapped in a white ribbon. Jess was delighted and attacked the piñata until it spilled out 600 rose petals and 30 Ring Pops. She hadn’t noticed that the ribbon on her bat had become undone, until Sam pointed out that she should see what was under it. She ripped off the rest of the ribbon to find this message engraved in gold:

Will you marry me, Jess?

Just as it sank in, “Single Ladies” began playing and Sam went down on one knee and presented Jess with her dream ring. Still doubled over in shock, Jess gave him a big “yes!” Sam says the best moments of his life have been the moments spent with Jess, and the proposal was the best of those. 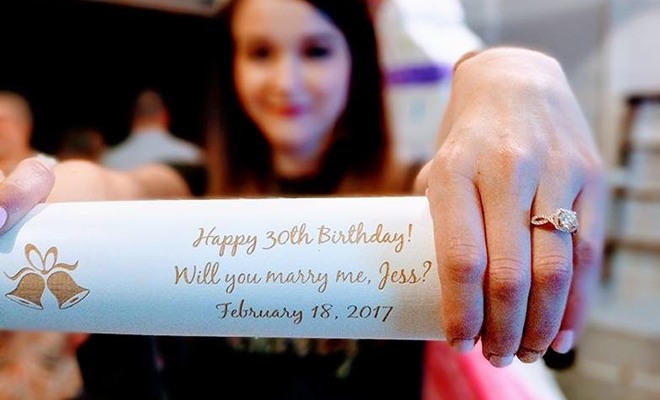 Sam and Jess haven’t yet made many plans for their wedding, but they’re having tons of fun experiencing venue tours, cake tastings and all of the other exciting activities that come along with getting married. We wish these two lovebirds the best on their journey, and we can’t wait to see what comes next for them.

Read More
Marriage is a big step in a relationship, so it makes sense to wonder if you and your…
Read More